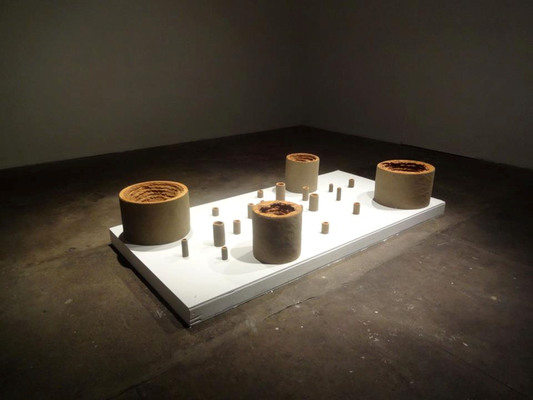 In its original form as an expanding installation piece, “The Pits of Despair” consisted of four large works representing socio-economic and emotional issues such as Credit Card Debt, Regret, Uncertainty and Worry. In the center of these four were two additional series of works which represented people.

With both “Empty People” and “A Nuclear Family” I was playing with the concepts of iconography, hero worship and the dysfunctional family. Reminiscent of geological features such as sink holes and chasms, these works give the viewer the impression of falling into a pit of despair. But what exactly is an Empty Person? It’s someone who appears to be solid on the outside yet completely hollow on the inside. These people are often those in society who we look up to and trust. A few examples include our religious leaders, politicians, movie stars, soldiers, bankers or even members of our own family. I group them together to suggest a social hierarchy or clique with one or two larger figures as the center of attention surrounded by others who gravitate towards them. In larger installations they appear to resemble entire cities or communities.